Musician, singer, composer, graphic designer, art director. Then writer, scriptwriter, documentary film-maker, material explorer and spiritual researcher. This is what Andrea Pietrangeli does, but here is his Story:

1986 ‘Nothing is as it seems’, said the budding seventeen-year-old Andrea Pietrangeli who, in 1986, made his debut as singer-songwriter and guitarist in numerous clubs in Rome, where he was born and has lived until recently. He then went on to work with Ricordi recording company and with producer Alessandro Colombini (A. Venditti and L. Dalla); he composed over 150 tracks, performing on TV and with his band Tiennettì (on the TV programme Striscia la Notizia for a whole season), and worked with Umberto Tozzo and as support on tour with Paolo Belli, singer in the group Ladri di Biciclette.

2004 While experiencing life as a performing artist (and setting up his band, Tiennettì), he also built a business career as Art Director for several companies in Rome, culminating this entrepreneurial activity as Sole Administrator of his own graphics company. In 2004, at the age of only 35 and following the death of his father, Andrea learnt through his own emotions that no-one is immune from the brevity of earthly life and, with the courage necessary to give up the security he had worked for, he came to the decision to ‘drop everything’.

This marked the beginning of his inner journey, with studies in philosophy, spirituality and psychology, seeking his conscience to find himself. For Andrea, reading and, above all, direct experience have always been the gateways towards new areas of reflection and new, endless possibilities.

During this time, he undertook a journey in the Sinai Desert where walking took on a symbolic meaning, and then went on to share numerous journeys with others all over Italy, as speaker and guide in experiential workshops, individual encounters and small groups, gaining direct experience of the body and its limits. Through periods of fasting, meditation, shamanic practices and drastic nutritional changes, he tested the relationship between his body and his conscience and discovered new relational dynamics connected to emotional balance and to personal life fulfilment. In the Workshops, he became the “Alleviator”, continually making use of unexpected and fascinating interactions. Thanks to his natural ability to conciliate, Andrea is capable of restoring confidence in those who are troubled, even in such serious matters as physical death and the immortality of the soul. In his own words: “Life is an opportunity not to be missed. Even when we have to deal with pain, illness and death, complaining about the difficulties we have to face is useless, and it is exactly there that we can find the key to interior balance.”

He started teaching at the School of Psychosophy in Bassano Romano, holding many conferences on topics such as Creativity and Money – The Hidden Meanings in Fables – The Demons of the Chakras – The Spirit becomes Flesh – The Symbolism and Use of Feminine Energies.

A new interest in Quantum Astrology led him to understand how people’s diversity must be respected and not judged: each single person has his own path to follow and his own challenge which is always influenced by the stars.

2011 Drawing on these experiences he produced his first non-fictional work, Manuale di Risveglio – The First Real Step towards Happiness (Publisher: Anima Milano, 2011); such clear reading that, after a quick immersion in the understanding of relational dynamics, there is no going back.

2013 Andrea shared with his readers the autobiography of his own personal reawakening. RiEvoluzione – Alchemic Novel (Publisher: Spazio Interiore Roma, 2013), the first in his trilogy of novels, shows the way to return to nature and to the biological rhythms that our cities have altered, but does not neglect current issues such as the illusory influence of Masonry on political life, control of the masses through the fake power of screens (big and small) that transform reality into a huge, holographic, collective cage.

2014 In just a few months RiEvoluzione became the number one online best-seller (Il Giardino dei Libri, August 2014) and was developed into a Musical entitled ‘RiEvoluzione – An Alchemic Journey through Pink Floyd’, on stage at Rome’s Vascello theatre with the participation of Fluido Rosa, Italy’s foremost Pink Floyd tribute band. The rhythm of the book is punctuated with lyrics by the British band at the end of each chapter.

2015 An intimate call from India led Andrea to venture out alone on an incredible journey, first to the north of the country and the temple of the Dalai Lama (Dharamsala), then to a place near New Delhi (Vrindavan) where he lived through extreme experiences: near death when he contracted a virus and experienced first- hand how illness can hide evolutionary messages.

Andrea dedicated much attention to this subject in his third book, his second novel, InCarnA(C)tion – Cosmic Novel (Publisher: Spazio Interiore Roma, 2016), also autobiographically inspired, and his travels in India soon became the subject of a documentary entitled Watching India (watch Youtube channel) that Pietrangeli himself directed.
Luckily, not all journeys entail such demanding adventures and Andrea knows how to enjoy the pleasures of a less harsh life. Having to work to make a living, one might as well do it in the best conditions, like spending about four months in the Maldives: an experience completely dedicated to singing, music, the sea, the sun, while leaving plenty of room for new intuitions.

2016 The Year of the Walk, proclaimed by the Italian Minister of Cultural Heritage, Dario Franceschini.
Andrea Pietrangeli was inspired by this initiative to present his most recent work, InCarnA(C)tion, on the stages of a route, followed entirely on-foot, from Rome to Milan along one of the most ancient roads, the Via Francigena (watch the documentary here). On the TV programme Kilimangiaro, he said:

“Presenting my book in concomitance with a journey on foot is liberating. Undertaking a walk helps, little by little, to perceive the journey of the soul, which is eternal, in relation to that of the body, which is temporal. The journey of the body is possession, attachment, fear, while that of the soul is trust, comprehension, happiness. Walking free means you have recognised the roots of fear.”

On 1 October 2016 a special presentation of the novel InCarnA(C)tion was championed by two exceptional supporters: in the Sala dei Sigilli of Fortesangallo Castle in the Town of Nettuno, Max Tortora and Antonio Rezza took part in a unique, entertaining evening (watch the full footage here).

The Walk is also a challenge towards the unknown and entails risks, but for Andrea ‘…being courageous means being afraid, but doing what you are afraid of anyway.’ And he should know. In August 2016 he faced ‘Three Nights in the Wood’, a solo initiation challenge aimed at better understanding the relations among human, animal, fear, subconscious and instincts. On the border between Lazio and Abruzzo, at the time of the earthquakes, he went through a dramatic experience recounted in the postface of his new book LiberAzione – Animic Novel (Publisher: Spazio Interiore Roma, 2017).

2017 While InCarnA(C)tion was becoming a Best-Seller (documentary here).
Pietrangeli’s fourth book LiberAzione, went into print. An animated book and interactive fable. Right from the beginning, the reader can savour and recognise the sensations nature gives us, identify with the body of the main character, Constantine, a mastiff with ‘ancient’ origins, and through his story, from a dog’s-eye view, see and feel emotions that each human being needs to become himself. On Tg2, Andrea said (link here):

‘While living lightly we can still pull out ancient chains,
wounds that can only be healed in the present,
as animals and children teach us.
To strive for a better future is simply a better way of thinking.’

This completes the Trilogy of the Inner Journey which has had some very special backers:

• Jodorowski championed RiEvoluzione and, thanks to his blessing, the book stayed constantly in first place for online sales in 2014;
• Luca Ward lent his voice to the booktrailer for InCarnA(C)tion;
• Franco Battiato, who read LiberAzione in print preview, donated a precious comment and his contribution is published on the back cover;
The preface of LiberAzione is by Silvia Vaccarezza, journalist and Tg2 news presenter.

Andrea’s journeys have allowed us to enter into the Nature of animals and of man. His sensitivity in matters of communication among living beings, humans, animals and plants makes of him a high-profile personality in holistic circles and with animal-rights associations. He always succeeds in helping people to think about the meaning of NOT using animals as food and about the equal importance of NOT hounding those who need to continue feeding themselves as they always have done. Love and respect for the time others need.
Andrea never stops expressing his creativity: writing books, composing music and creating works of art that are generated from direct contact with people.

There are many ways of describing this eclectic artist, but Andrea is perhaps best described as a Craftsman of Inner Works, committed daily to experiencing and creating his own reality that blends with the other realities of the souls he meets on the journey of life.

On 27 July 2017 Andrea spoke at Montecitorio (seat of the Italian Chamber of Deputies), participating in the project named Portatori di Unicità (Carriers of Uniqueness) to present the seminar on Freedom held on 7/8 October 2017 at La Sapienza University of Rome (Faculty of Political Sciences, Sociology and Communication). Link here.

July 2017 was also when his first 432 Hz music CD was launched: From the Stars to the Stars - Andrea Pietrangeli. Timeless instrumental music that vibrates on the same frequency as the Earth. The choice of these tracks was dictated by the intuition to share music that until now had always been used exclusively and personally by the artist. After many years of rehearsals, compositions and transformations, the natural compilation of very different tracks came about spontaneously in a pathway to be followed through the titles, the sound and, naturally, within oneself. The CD is available here, while you can listen to a few clips here.

Andrea currently lives on Fuerteventura, a main island in the Canaries, and organises retreats in contact with the elements and reactivation of the body in nature.

FUERTEVENTURA REBIRTH is the name of the retreat and on this page (link) you can follow his daily blog, with a wealth of photos and impressions contaminated by the magic of the island.

“The purpose of a journey has no messages of any kind, the sense of the path is innate in the authenticity of the walk itself, opening oneself and entrusting oneself to life at the present moment, having the courage to leave everything behind and… simply to go”. 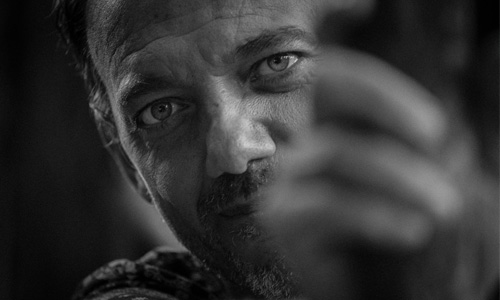 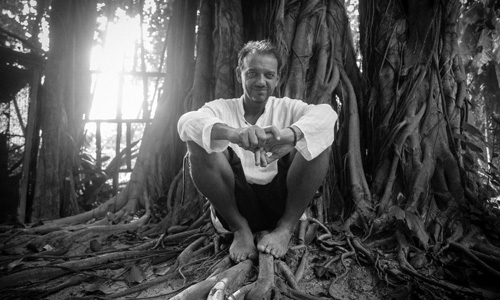 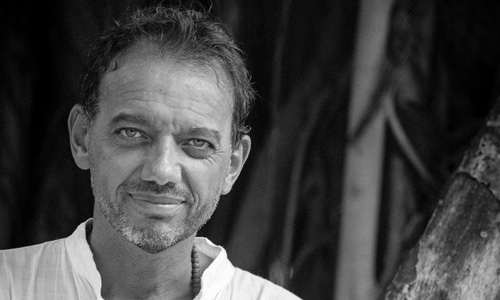